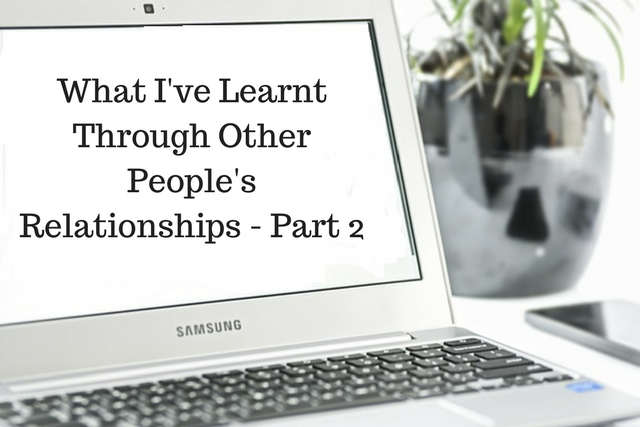 Awhile ago I wrote a post about what I’ve learnt through other people’s relationships. I thought I’d do a follow up post because really, there is so much to learn through observing other people’s behaviour.

Relationships can be tricky but they don’t have to be difficult. They only really need a few things to work but for some reason a lot of people can’t manage it. To me a relationship must have trust, honesty and respect. Without those they simply do not work. Here’s what I’ve learnt through other people’s relationships.

Eventually this couple did break up and break up for good which was a blessing for us all who were involved in their lives. The partner who simply could not stop cheating eventually ended up in an open relationship with a new main partner and they couldn’t be happier. The other partner is now happily married with a partner who doesn’t cheat and they are expecting a baby in a couple of months. To me it seems that this couple learnt from their previous relationship and made good on their new one.

But it just goes to show that without these 3 main ingredients, relationships become far more work than they need to be and if you want to work through it, great, but if you don’t it might just be time to suck it up and let it go.

What do you think are key ingredients for a successful relationship?